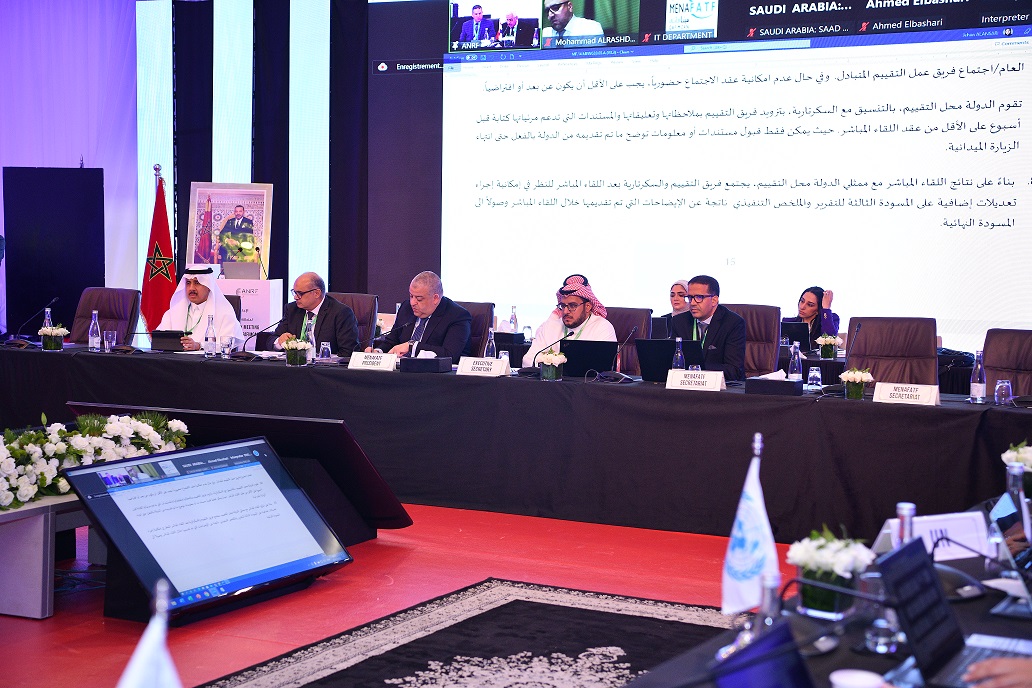 The work of the MENAFATF’s 35th plenary, which was held over two days in Rabat, Kingdom of Morocco, was concluded on Friday, 25 November 2022, where it was opened with an opening statement by Her Excellency Mrs. Nadia Fattah, Minister of Economy and Finance in the Kingdom of Morocco, by His Excellency Dr. Jawhar Al-Nafisi, MENAFATF president, and chairman of the Moroccan FIU, and his Excellency Mr. Suliman Aljabrin MENAFATF excutive secertary.

The meeting was chaired by His Excellency Dr. Jawhar Al-Nafisi, MENAFATF president, and chairman of the Moroccan FIU. The meeting witnessed the attendance of heads of delegations, AML/CFT/CPF experts from member countries, in addition to experts from observer countries and international organizations concerned with AML/CFT/CPF, led by FATF, UN, IMF and Egmont Group.

A number of working papers related to mutual evaluation were discussed, including the paper on the amended procedures for mutual evaluations and follow-up processes. in addition to topics related to the plans and development of the MENAFATF’s works, including the MENAFATF’s action plan for 2023, increasing the effectiveness of the MENAFATF, and areas of technical assistance and typologies such as the plan of training programs and webinars for 2023 and the typologies project on the abuse of NPOs and It also adopted the implementation of a new typologies project on ML/TF through legal persons and legal arrangements. The priorities of the presidency of the Islamic Republic of Mauritania for the group for the year 2023 were also approved, and the Republic of Yemen assumed the position of vice president of the group for the year 2023.

On 16 November 2022, the TATWG discussed areas of technical assistance and typologies from workshops and training programs on topics related to the MENAFATF’s work areas, the plan of training programs and webinars for 2023 and other future projects in the areas of typologies. The working group also discussed a draft report of the typologies project on the abuse of NPOs in TF. A recommendation was submitted to the plenary for adoption. It also adopted the implementation of a new typologies project on ML/TF through legal persons and legal arrangements according to the recommendation submitted by the TATWG.

The plenary was briefed on the report of the Chairman of the FIUs Forum and the most important thing that took place in the 23rd meeting thereof. The plenary meeting welcomed the Executive Secretary of the Egmont Group for attending this meeting, where he affirmed his support for the non-member FIUs of the non-member countries of the Egmont Group and the most important steps taken for accession therein. The executive secretary of Egmont  Group also promised overcoming difficulties and facilitating the accession thereto and focusing the MENAFATF’s strategic plan on the Middle East and North Africa region with a special goal for the region to address all related issues and support the relationship with the MENAFATF and work closely therewith. Among the outcomes of the meeting was also a review of the experiences of a number of member countries in the forum and the exchange of experiences and best practices on “enhancing cooperation between FIUs and the nationally bodies entrusted with fighting corruption”. The first version of which was launched on the sidelines of the forum.

The 15th meeting of the Risk Committee was held on 13 November 2022, during which a presentation was made by the MENAFATF’s secretariat on the technical assistance and training program in the field of risks, and a panel with a number of experts in the region on the application of the risk-based approach with relation to new technologies. There were also participations of a number of presentations from member countries and international organizations that aim to share knowledge among the MENAFATF countries, and review the FATF guidance on the risk-based approach to real estate sector. The meeting was concluded with a recommendation to translate the guidance on the risk-based approach to the real estate sector, urging member countries to implement the requirements of the risk-based approach according to the requirements of Recommendation 15 and to follow up on emerging risks.

The plenary meeting warmly welcomed the new OFTF president, Dr. Ahmed Rashid Al-Dhanhani, Attorney General at the State Security Prosecution in the United Arab Emirates and a member of the National AML/CFT Committee. The Executive Secretary extended his gratitude to the former president, Major General Jassim Mahmoud Al-Mahmoud from the State of Qatar, commending Qatar’s role in putting forward the initiative to establish this forum in continuation of its international contributions to combating terrorism and its financing. Then the plenary listened to the report of the OFTF chairman and the most important discussion

that took place in the 8th meeting for 2023-2024 and its action plan. Whereby presentations by the secretariat and a representative of the UNODC on topics related to risks, methods, trends, challenges and best practices in detecting and preventing terrorist financing operations were also discussed, in addition to the experiences exchanged during this meeting in the areas of parallel financial investigations in relation to TF from both the UNOCT and the United Arab Emirates and the risks of the relationship between organized crime and TF made by the secretariat.