On Thursday the 17th of November 2016, the 24th plenary meeting of MENAFATF on AML/CFT was closed. This three-day meeting was held in Doha, Qatar starting 15 November 2016, and it was presided by the State of Qatar, represented by H.E. Sheikh Fahed Bin Faisal Al Thani, Vice-Governor of the Qatar Central Bank, the President of the National AML/CFT Committee in Qatar, and the President of MENAFATF. 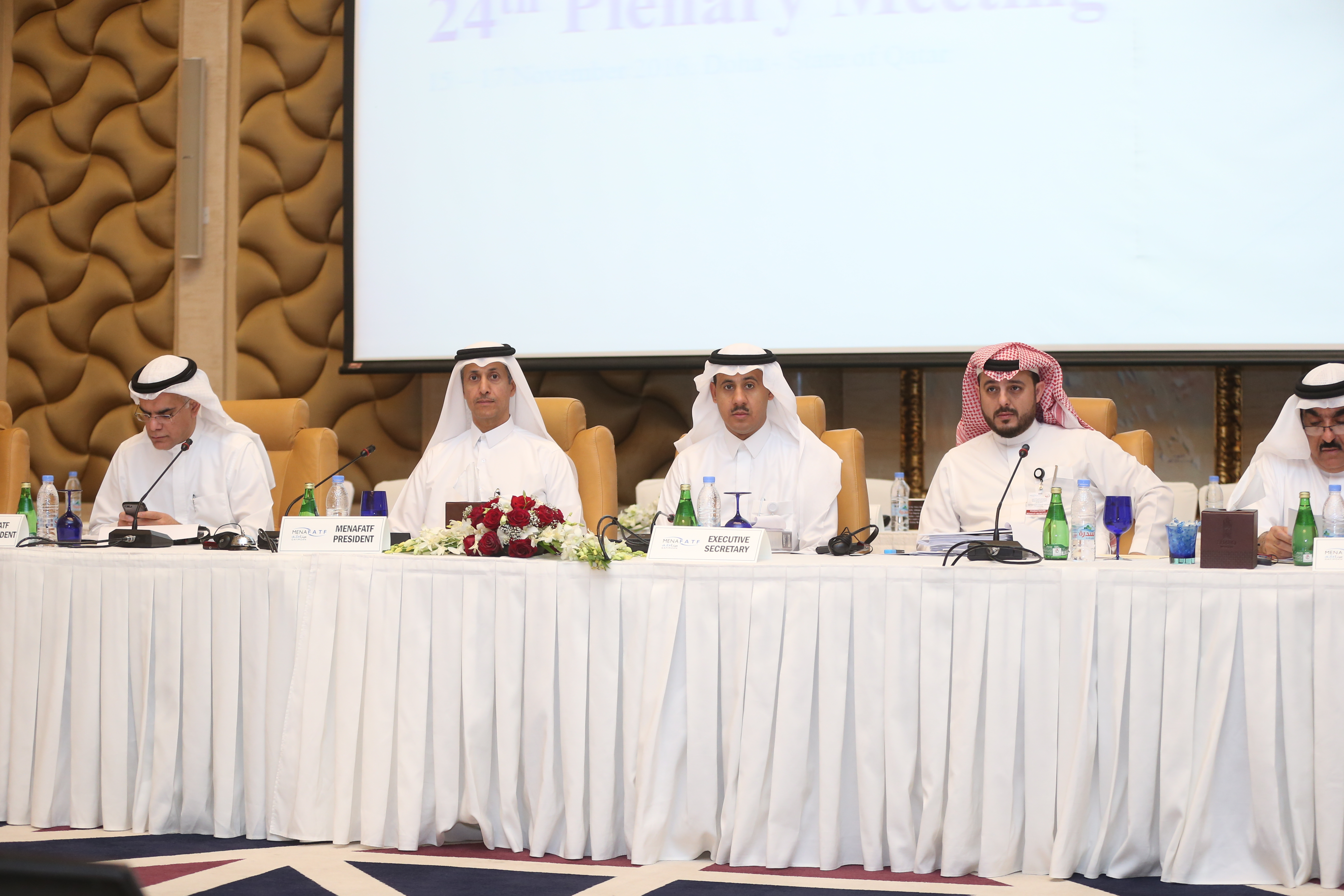 The plenary meeting tackled a number of important subjects related to the work and different activities of the Group, and it has taken several decisions in their regard. Furthermore, the Group held on the three days preceding the meeting, i.e from Saturday to Monday, the meetings of the Mutual Evaluation Working Group and the Technical Assistance & Typologies Working Group, the meeting of the FIUs forum, the meeting of the Operational Experts Forum on Terrorist Financing (OFTF), and the meeting of the National Risk Assessment Committee, in addition to other meetings. 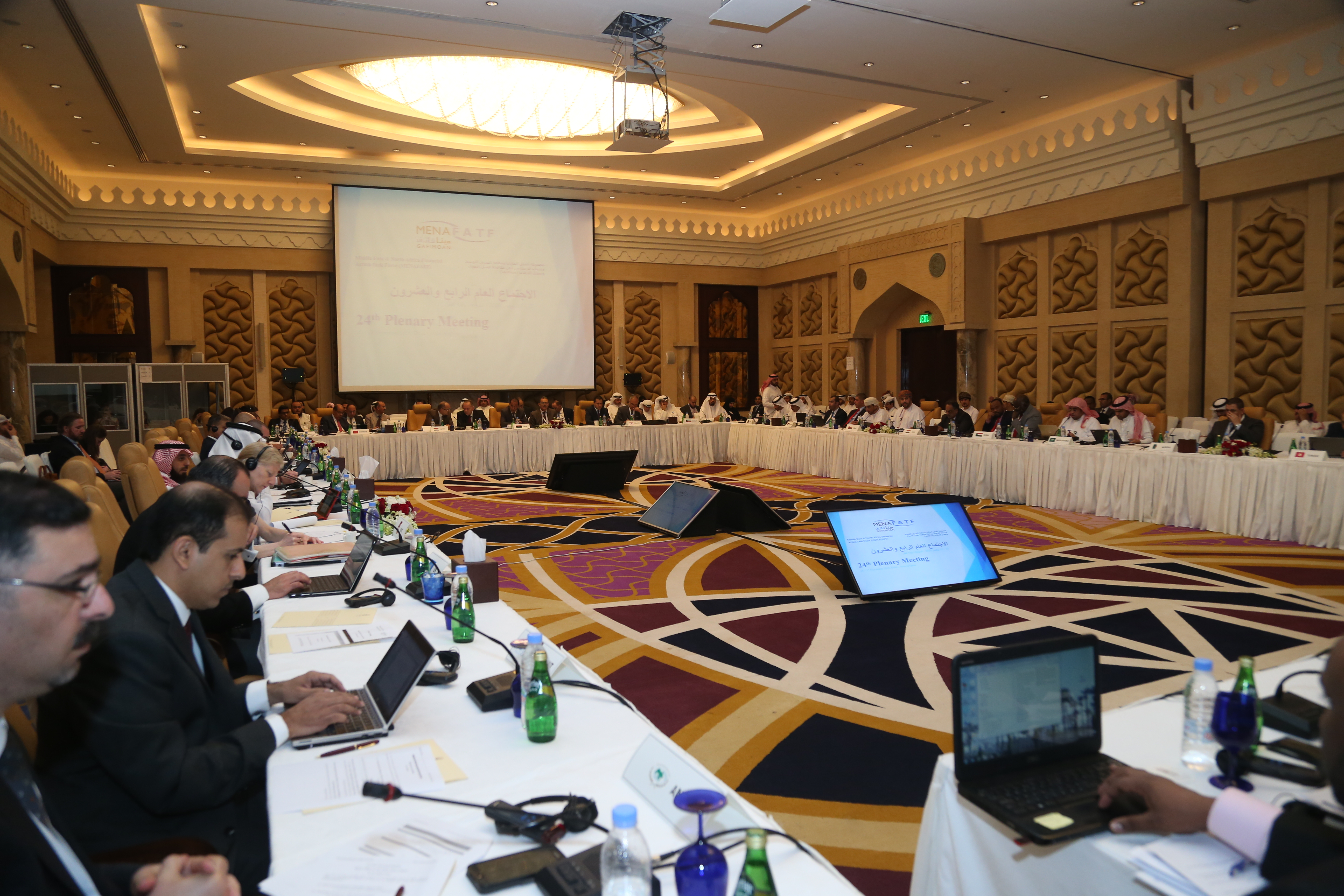 Reinforcing MENAFATF Efforts in the field of CFT

The plenary meeting followed up the execution of the proposals of the presidency of the Group regarding the reinforcement of the efforts in the field of CFT, by taking better advantage of the capabilities and experiences of the member states, exchanging experiences in this regard, supporting relevant capacities, consolidating the cooperation between the Group and other parties, improving the level of relevant contributions to the programs that promote the capacities and potential of the states in order to face the threats, giving the terrorism financing issue top priority in the current phase of the Group’s work, and establishing appropriate mechanisms that enable the Group to face such phenomenon.

In this context, the first meeting of the Operational Experts Forum on Terrorist Financing (OFTF), presided by the State of Qatar, was held on the margin of the 24th plenary meeting on the 12th of November 2016. And in the scope of exchange of practical experiences by the participants, the forum tackled the challenges and best practices to detect and prevent terrorism financing operations, the sanctions systems adopted at the Security Council, the chronological order for imposing the sanctions on the terrorist organizations, and the role of the FIUs in all such cases related to FT crimes, in addition to the collection of evidence that the courts rely on in order to rule in such cases.

The forum stressed on the importance of promoting national cooperation among competent CFT institutions, and the importance of the role of FIUs in terms of discovering the financing sources of the terrorist organizations and the role of the supervisory and control authorities, and the importance of establishing developed databases to facilitate the tracking and monitoring operations and the exchange of intelligence information with counterparts, in addition to providing technical assistance in the field of CFT based on the needs of the member states.

In the scope of the follow-up processes conducted after the mutual evaluation processes, the plenary meeting discussed the progress made by some member states in terms of compliance with the AML/CFT international standards, and it praised the achievements realized in terms of promoting relevant pertinent systems based on the plan of the mutual evaluation report for each of them. The plenary meeting has also considered four follow-up reports related to Syria, Iraq, Oman, and Lebanon.

Moreover, the plenary meeting perused three update reports related to the UAE, Egypt, and Bahrain, which included the latest developments and procedures taken by such states in order to improve their AML/CFT system.

Preparing for the second round of Mutual Evaluation

Approval of the biennial typologies report 2016

In the scope of the typologies work, the plenary meeting adopted the biennial typologies report 2016, which tackles the most important practical cases and the newly created modes in the field of ML/FT at regional level; it also gives an overview of the main activities undertaken by the Group in the field of typologies between May 2014 and May 2016. The report will be soon published on the website of the Group. It is worth mentioning that the Group is currently considering a number of issues related to typologies, namely: Money Laundering and Corruption, Money Laundering Through Electronic Means, and Social Media and Terrorism Financing.

Group meetings held on the margin of the plenary meeting

The meeting perused a report on the activities of the Group between April 2016 and November 2016, and it adopted the work plan and priorities of the presidency (State of Kuwait) for the year 2017.