The 17th plenary meeting was held in Khartoum from 30 April to 2 May 2013. The meeting was chaired by the Republic of Sudan, represented by H.E. Mr. Esam Eddine Abdul GAdir Al Zain, Undersecretary of the Ministry of Justice and President of the Administrative Committee for combating ML/TF crimes in Sudan and inaugurated by H.E. Mr. Ali Mahmoud Abdul Rasool, Minister of Finance and National Economy in Sudan in the presence of H.E. Dr. Mohamed Khair Al Zubair, Governor of Central Bank of Sudan. 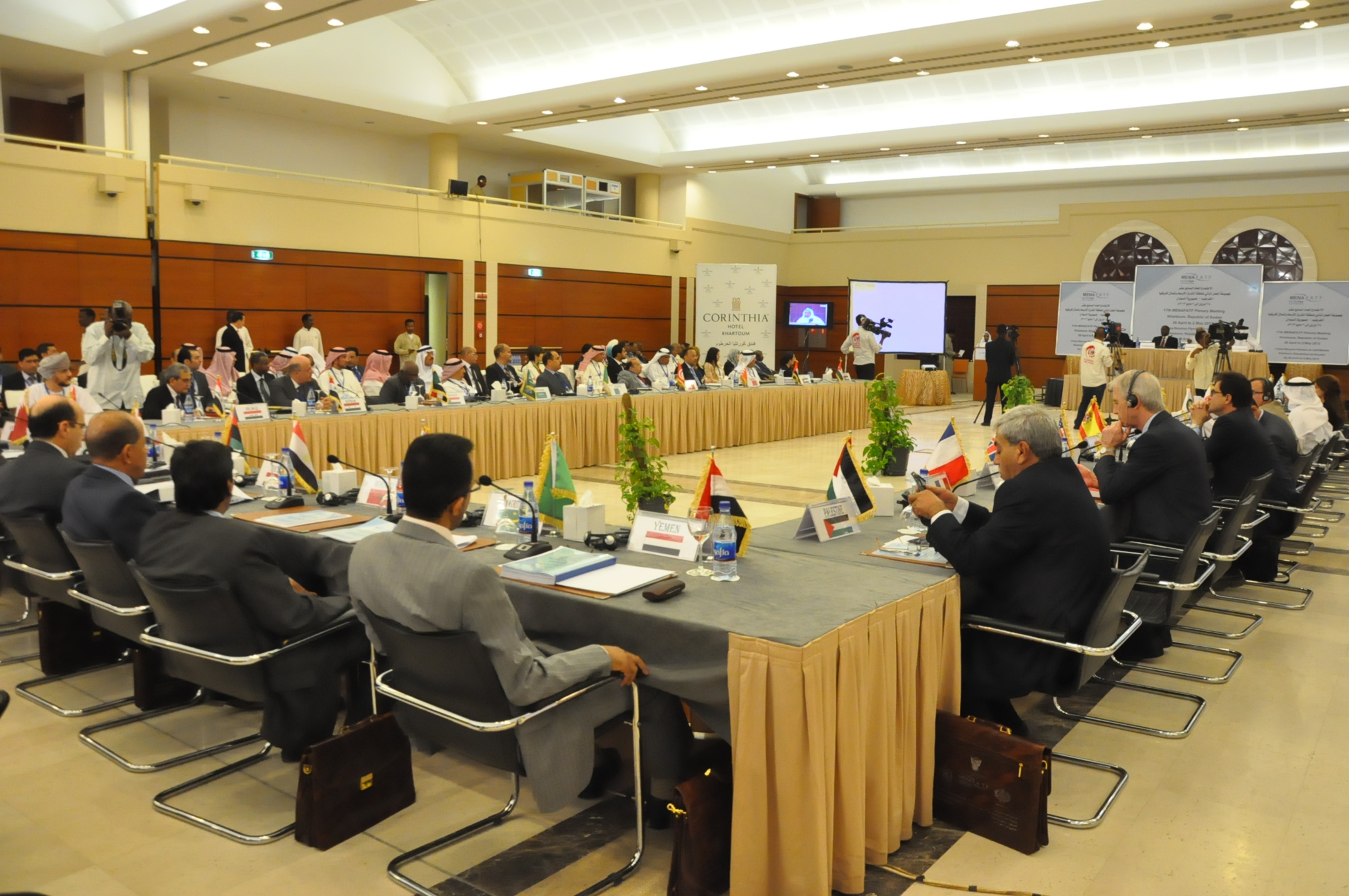 A set of important topics related to a series of issues on MENAFATF work and activities were discussed during the sessions of the plenary meeting. Below are the most important decisions issued by the meeting:
1)   8th Annual Report of year 2012, Closing Account 2012 and External Auditor Report

The plenary meeting adopted the 8th Annual Report for the year 2012, which covers the activities and achievements made by MENAFATF in 2012; Closing Account and External Auditor Report for the same period were also approved.
2)   MENAFATF 2014 Budget

The plenary meeting adopted the budget for year 2014; the budget is funded by the contributions of all member countries based on the principle of equality, to provide the financial resources required for the Secretariat to carry out the functions that are assigned to it according to the work plan established for 2014.
3)   The new methodology for mutual evaluations

During the first sessions, the plenary meeting reviewed the new assessment methodology on combating money laundering and terrorism financing and proliferation issued by the FATF in February 2012 within the preparations to launch the second round of mutual evaluations. The methodology includes new concepts and elements that assist the evaluators in conducting mutual evaluations for member countries.
4)   Hashemite Kingdom of Jordan moves from regular follow up process to the biennial update

The plenary reviewed the large progress made by the Hashemite Kingdom of Jordan and praised the achievements it has made in enhancing its AML/CFT regime based on the plan established in the mutual evaluation report. The plenary meeting adopted the 3rd follow up report for Jordan and approved to be moved from regular follow up to biennial update; the report will be published on MENAFATF website.
5)   Typologies Report on “ML/TF trends and indicators - Update”:
The plenary meeting adopted the typologies report on “ML/TF trends and indicators – Update” which was submitted and recommended by the TATWG and prepared by MENA Experts Group. The report concluded by submitting recommendations that aim at enhancing the AML/CFT process in the MENA countries.
6)   Follow up reports:

Within the framework of the follow up for the mutual evaluation processes, the 17th plenary meeting adopted 11 follow-up reports for the following countries: State of Kuwait, Sultanate of Oman, Kingdom of Saudi Arabia, Republic of Lebanon, Arab Republic of Egypt, Republic of Tunisia, Republic of Yemen, Islamic Republic of Mauritania, Kingdom of Morocco and Arab Republic of Syria. The reports revealed the progress made by such countries in developing their AML/CFT regimes in light of the plan established for that purpose in their mutual evaluation reports adopted between 2006 and 2010.
7)   Working Groups:
The Plenary adopted the Mutual Evaluation Working Group (MEWG) Chair report, which included recommendations the MEWG has reached in its meeting held on Monday 29 April 2013 on the margin of the 17th Plenary meeting. The most important issues are the following:

Further, the Plenary adopted the Technical Assistance and Typologies Working Group (TATWG) Chair report, which included the most important recommendations agreed on during the TATWG meeting held on Monday 29 April 2013 on the margin of the 17th Plenary; the most important issues are the following:

The 7th MENAFATF FIUs forum was held on Sunday 28 April 2013 on the margin of the 17th plenary meeting; the most important issues are summarized below:

9)   Next Plenary Meeting:
The 18th MENAFATF plenary meeting will be held in November 2013.